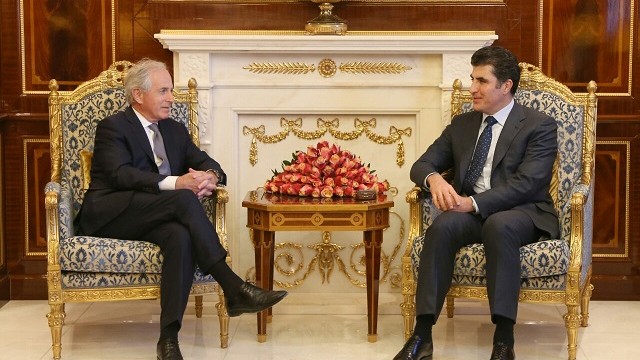 In the meeting, attended by Kurdistan Regional Government Deputy Prime Minister, Qubad Talabani and a number of KRG senior officials, Mr. Corker commended the level of cooperation between Kurdistan Region military forces, the Peshmerga, and the Iraqi army in the battle to liberate Mosul and its environs. He stressed the need for such cooperation to include other fields as well, emphasizing the key role of the Kurdistan Region in achieving a general reconciliation in Iraq.

Senator Corker also expressed his country’s support for the settlement of all the outstanding issues between Erbil and Baghdad.

Prime Minister Barzani expressed his gratitude for the assistance provided by the United States and the international coalition in general to the Kurdistan Region.

While expressing satisfaction at the level of cooperation between Baghdad and Erbil at the military level, Prime Minister Barzani pointed out that no serious progress has been made in cooperation in other areas. He stressed KRG’s willingness to settle the outstanding issues between the two sides through dialogue and mutual understanding.

He also highlighted the need to set a general reconciliation plan which has so far not been discussed in Baghdad.

Prime Minister Barzani also briefed the visiting delegation about the financial crisis in the Kurdistan Region, and the measures taken by the government to ease its severity.