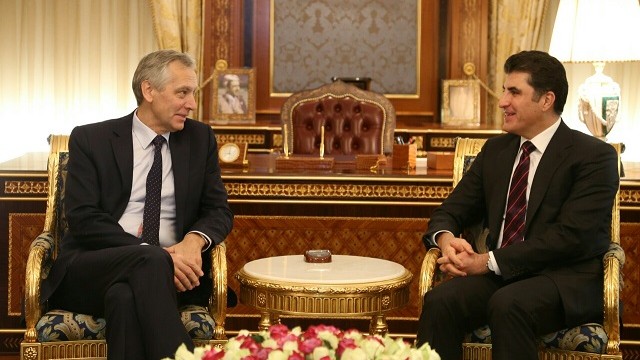 Kurdistan Regional Government Prime Minister Nechirvan Barzani received Mr. Ján Figel, Special Envoy for the promotion of freedom of religion or belief outside the European Union, and his accompanying delegation.

The delegation appreciated the peaceful religious coexistence that prevails in the Kurdistan Region, stressing their support and hope for its expansion throughout Iraq.  They commended the Kurdistan Region for sheltering and assisting a very large number of refugees from Syria and internally displaced Iraqis who fled ISIS’ atrocities.

Pointing out that peaceful coexistence is inherent in Kurdistan’s culture, Prime Minister Barzani stated that the leadership has been constantly working for Kurdistan to become a factor of stability. He deemed it important that all sides promote stability and coexistence, inspired by Kurdistan’s experience as a model for the larger region in Middle East.

Prime Minister Barzani expressed his sorrow for the fact that ethnic and religious cleansing campaigns continue to occur in some places. He hoped that the post-ISIS era will be marked by an effective comprehensive reconciliation campaign, return of the internally displaced people to their places of origin, along with the introduction of a culture of peaceful coexistence, with its responsibilities, into education programmes.