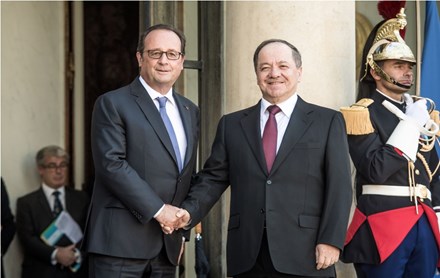 Paris, France, (Krp.org)- President Masoud Barzani was received by the President of France, Francois Hollande in Paris today. During the meeting President Barzani and President Hollande discussed the latest advances against the terrorists of the Islamic State. President Barzani noted that the support of France shall be remembered by the Kurdistan Region and for that support he expressed, on behalf of the people of the Kurdistan Region his deep sense of appreciation.

President Barzani and President Hollande also spoke of the political developments in the region especially vis-a-vis the impact of such events on the Kurdistan Region.

The two sides spoke in detail about the Mosul operation and it was then that Presient Barzani reiterated his stance to President Hollande that all the concerned parties from within Iraq and the allies should pay very careful attention to the day after liberation, as that process will of immense difficulty.

Barzani meets with French defense minister and mayor of Paris

Prime Minister Barzani and US Deputy Secretary of State discuss liberation of...