News
You are here: Home / News / Kurdistan Region President meets with US Secretary of Defense 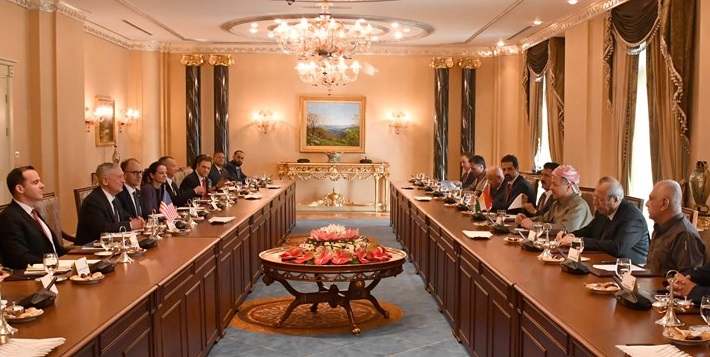 According to the official website of the Kurdistan Region Presidency, President Barzani and Secretary Mattis reviewed the ongoing operations against the so-called Islamic State terror group as well as recent developments. Secretary Mattis saluted the Iraqi and Peshmerga forces for liberating the city of Mosul and their victories against ISIS. He conveyed his condolences on behalf of the United States military to the families of the fallen Peshmergas.

President Barzani expressed his gratitude to the United States for its continued support to the Peshmerga forces, the people and government of the Kurdistan Region.

The two leaders also discussed the upcoming referendum on Kurdistan’s Independence. Secretary Mattis stated that he understands the grievances of the people of the Kurdistan Region; however, he conveyed his government’s concern that the referendum may hinder collective efforts against ISIS. President Barzani stated that holding referendum is a natural right of the people and does not contradict with democratic and human rights principles.  He listed major constitutional violations committed against the Kurdistan Region by the central government of Iraq. The President also reassured Secretary Mattis that the referendum would not impede operations against ISIS, whom the President branded as brutal and common enemy facing all of humanity.