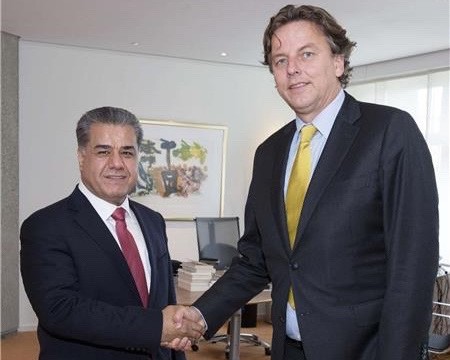 The Hague, The Netherlands (dfr.gov.krd) Today Head of the KRG Department of Foreign Relations Minister Falah Mustafa, together with two Yezidi NGOs, submitted a comprehensive report to the office of the ICC chief prosecutor in the Hague regarding the ISIS genocide against the Yezidis. This comes as a follow-up to previous efforts, and this detailed report provides further information.

The delegation delivered the detailed report to the chief prosecutor’s office for analysis, with the hope that the ICC will open a preliminary investigation into these crimes on the basis of this supplemental report.

Despite the fact that Iraq is not an ICC member state, the court does have jurisdiction over the activities of ICC member state nationals wherever they may commit crimes. It is hoped that this report (the redacted version is linked below) will prompt the ICC to commence its preliminary investigation by demonstrating that the international court has jurisdiction, due to the large number and heinous nature of the crimes perpetrated by ISIS foreign fighters who are nationals of ICC member states.

Minister Mustafa said, “The KRG fully supports the prospect of an ICC investigation, and we know that Yezidis rightly demand justice. The peaceful Yezidi community was deliberately and brutally targeted by ISIS, and the international community has a responsibility to ensure that this genocide is recognized. Now that the evidence is there, it is the time for international legal bodies to play their roles and conduct appropriate investigations.” He added, “As a matter of principle, the KRG seeks justice and recognition so that these crimes are properly documented, victims are compensated, and genocide is not repeated.”

As part of his visit to the Netherlands, the Head of the KRG Department of Foreign Relations met with the Minister of Foreign Affairs of the Netherlands, Mr Bert Koenders in the Hague to discuss bilateral ties as well as recent military and humanitarian developments.

Reiterating KRG’s commitment to continue the fight against terrorists and to carry on its open door policy towards refugees and displaced people, the KRG Minister called for continued international support.

He stated that the scale and magnitude of the challenges are beyond the capabilities of the KRG; the challenges have placed an incredible burden on the government and the people of the Kurdistan Region. The Minister thanked the Dutch government for providing humanitarian and military support to Kurdistan Region and stressed the need to receive further and continued support from the international community.

Minister Koenders highly spoke of the role of Kurdistan Region in the fight against ISIS terrorists and in caring for Syrian refugees and Iraqi displaced people. The Dutch Minister reiterated the commitment of his government to continue supporting Kurdistan at both humanitarian and military levels.

Both Ministers discussed bilateral ties and areas of potential cooperation in order to increase economic and investment cooperation.

Minister Mustafa also briefed Minister Koenders on the KRG’s efforts to gain international recognition for the crimes committed by the ISIS terrorists against the Yezidi Kurds and other components in the Kurdistan Region and called for moral, legal and political support of the Dutch government. Minister Koenders expressed the readiness of his government to support such efforts and said that the perpetrators of such crimes must be prosecuted to the full extent of the law.