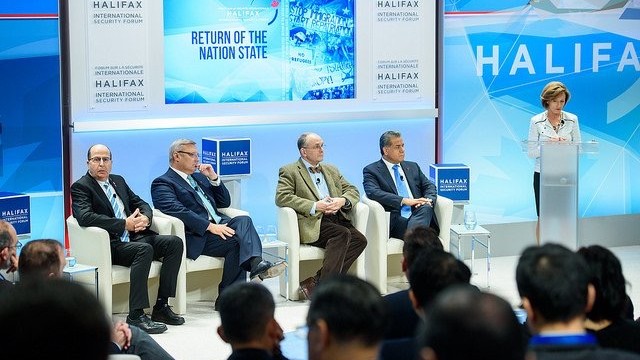 The annual conference was hosted by Canada’s Defense Minister Harjit Sajjan and brought together more than 300 government officials, military leaders, experts, academics and journalists from around 70 countries. In his opening remarks, Minister Sajjan highlighted the role of Kurdistan’s Peshmerga forces in the fight against the terrorists of ISIS.

Minister Bakir spoke on a panel titled, ‘The Return of the Nation State’, which was moderated by author, journalist and LeadersLink founder Kathleen Koch. Minister Bakir thanked the Halifax Security Forum for giving Kurdistan, ‘emerging democracy in the heart of the Middle East the opportunity to be present here to share our experiences and also our aspirations.’

He continued, ‘We want the will of the people of Kurdistan to be respected. When we talk about “unity”, it has to be voluntary. There is no coercive unity, because coercive unities have not succeeded.’
He said, ‘In Kurdistan we are proud of the culture of diversity and tolerance,’ and that, ‘Even with the rise of radicalization [in our region], Kurdistan has kept that nature.’

Representative Abdul Rahman also spoke at an off-the-record session about the role of women in the military.
A number of senior military leaders also delivered remarks, including Canada’s Chief of Defense Staff General Jonathan Vance, Admiral Michael Rogers, Director of the U.S. National Security Agency and Cyber Command and Admiral Harry Harris, Commander of the United States Pacific Command.  Chiefs of Defense include Stuart Peach, from the United Kingdom, Ricardo Visayaof the Philippines, Haakon Bruun-Hanssen of Norway, Antony Anderson of Jamaica and Thomas A. Middendorp of the Netherlands.

During the Forum, Minister Bakir and Representative Abdul Rahman met on the sidelines of the Forum with Canadian Defense Minister Harjit Sajjan. Croatian President Kolina Grabar-Kitarović, and Canada’s Chief of Defense Staff General Jonathan Vance, as well as other leaders and journalists.