Masrour Barzani was appointed Prime Minister of the 9th cabinet of the Kurdistan Regional Government on July 10, 2019. 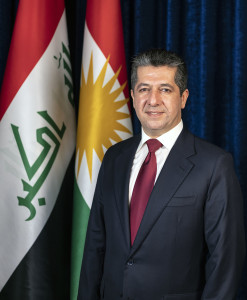 His promotion to the role follows a long and successful tenure as Chancellor of the Kurdistan Region Security Council in Iraqi Kurdistan, in which Barzani led efforts to safeguard Iraqi Kurdistan, the region and beyond against the Islamic State (ISIS) terror group.

Mr. Barzani has been one of the central global figures in the fight against ISIS, broadly credited internationally for reversing a menace that subverted regional states and attempted a genocide against minority groups. Under his watch as Chancellor, some of the most vulnerable communities in the Middle East have been sheltered and protected. Erbil, the seat of the Kurdistan Region Parliament is now home to a thriving community of Middle East Christians who have been granted long term refuge from persecution.

Mr. Barzani is a senior member of the Kurdistan Democratic Party (KDP) leadership. He has an accomplished history with the Kurdish resistance movement, having joined the Peshmerga, which translates to “those who face death”, in 1985 at the age of 16. He was an active participant in the Battle of Khwakurk against Saddam Hussein’s army in 1988. He also participated in the 1991 uprising against Saddam after the first Gulf War.

His childhood and youth was spent at the height of the Kurdish resistance, which was disruptive to life in Iraqi Kurdistan, and Barzani completed his secondary education in Iran. In 1992, he travelled to London for a year-long course in English. Having completed this, he then received a Bachelor’s degree with honors in International Studies from the American University in Washington, D.C. He continued studying Peace and Conflict Resolution for his post graduate work.

In 1998, Mr. Barzani returned to Kurdistan and was elected by the KDP’s 12th Congress to the Central Committee. Later that same year he was appointed General Director of the Protection and Intelligence Agency. In 2010, he received the highest votes of the 13th Congress, was re-elected to the Leadership Council and then selected as one of the Politburo members of the KDP. In 2012, he was appointed by the Kurdistan Region President Masoud Barzani as the first Chancellor of the Kurdistan Region Security Council to oversee security, military intelligence and intelligence services.

In 2005, he founded the Barzani Charity Foundation in Iraqi Kurdistan. This non-profit charity organization provides aid to the internally displaced, refugees as well as vulnerable locals, and is modeled on the life, struggle and principles of Mustafa Barzani. He is also the Chairman of the Board of Trustees of the American University Kurdistan (AUK). He laid the cornerstone of the project during a ceremony in Duhok province in December 2013.

Mr. Barzani is married and has four children, three sons and one daughter. He is fluent in Kurdish, Persian and English in addition to understanding Arabic. In his spare time he enjoys painting, horse riding and swimming.

To read news and activities of the Prime Minister, please, check the KRG website.