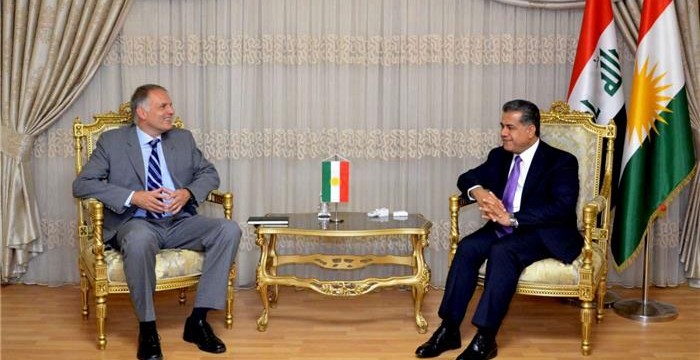 Minister Mustafa briefed the senators on the security, humanitarian and financial challenges facing the Kurdistan Region as well as ties between Erbil and Baghdad.

The Minister reiterated the commitment of the KRG to continue its open door policy towards refugees and displaced people and to carry on the fight against ISIS terrorists. The minister noted that in order to be more effective at both humanitarian and military levels the people and the government of Kurdistan Region expect further and continuous assistance from the international community.

He thanked the international community for their military support but stressed that defeating ISIS requires genuine regional and international cooperation and more commitment from the Counter-ISIS Coalition.

Commending KRG’s humanitarian response, Senator Destexhe stated, “We are very grateful to the KRG for accommodating a large number of refugees and displaced people from different ethnic and religious backgrounds.”

“Kurdistan Peshmerga forces are playing a key role in the fight against ISIS and have proven to be very effective, they deserve to be supported,” Senator Destexhe added.

Ms. Siham Jabali, the Assistant Head of the DFR, also attended the meeting.