On the occasion of Nawroz and the Kurdish New Year, I extend my warmest wishes to the families of our fallen heroes and the victims of the Anfal genocide. I congratulate the Kurdish people and all my fellow citizens in Kurdistan and abroad, the Kurdistan’s of the diaspora, and our brave Peshmerga and the security forces. I also extend my best wishes to all the nations who celebrate Nawroz around the world. May Nawroz bring peace, happiness and prosperity to everyone.

I extend my heartfelt gratitude and warmest wishes to all the medical teams and relevant authorities that have been in the forefront of the battle against the COVID-19 pandemic and continue to save lives and protect citizens for the second consecutive year.

We pay tribute to their colleagues who sacrificed their lives to save the lives of other people, and we honor the memories of all the people who lost their lives to the pandemic. I share the grief of their families and wish all the people battling the Covid-19 virus a speedy recovery. I thank the law enforcement authorities, police officers, security forces and the Peshmerga who have supported the efforts to contain the outbreak.

Nawroz is a national celebration and a symbol of success, revival and freedom of the Kurdish people. It is a new year and a new beginning; it gives hope and empowers us. On this occasion, let’s learn lessons from our past mistakes, be kind and tolerant. Let’s look to a brighter future with optimism. Let’s build our strengths and  work together to overcome the challenges.

We need to stand united in order to achieve better livelihood for our fellow citizens and to secure the constitutional rights of the people of Kurdistan. We need to put an end to harmful rivalries and disagreements among political parties in the country. All of us, political parties and communities, needs to be tolerant as we work together for a better Kurdistan and to preserve its freedom and democratic principles.

Therefore, I will invite all parties to a joint meeting at the Kurdistan Region Presidency after Nawroz celebrations.

We reiterate that the Kurdistan Region will cooperate and support any lasting settlement of the disputes with the Federal Government and the resolution of all the disagreements in Iraq, in order to maintain stability and peace in the country.

It must be recognized that the key to peace, stability and progress in Iraq is the resolution of the disagreements between the Kurdistan Region and the Federal Government.

We welcome any settlement that is not unilateral, and which safeguards the lawful rights of the people and components of Iraq, and preserves the constitutional rights of the Kurdistan Region, the federal system and the principles of partnership, consensus and balance. We urge the international community, the United Nations and the Security Council to support the resolution of Iraq’s problems.

On this occasion, once again we reiterate that the Kurdistan Region will remain a factor for peace, stability, coexistence, and tolerance. The Kurdistan Region will continue to cooperate, coordinate and work together with the international coalition and community. On the basis of mutual interests and values, the Kurdistan region will strengthen ties, cooperation and partnership with the regional neighbors and international communities. We will continue to confront terrorism and extremism.

May God bless Kurdistan, the people of Kurdistan and everyone around the world. Happy Nawroz to everyone. I hope all future celebrations are held in better conditions.

The Prime Minister congratulated Kurdistan on the occasion of National Clothing Day, which the citizens of the Kurdistan Region observe on March 10 to honor their traditional clothes and celebrate their heritage.

Minister of Endowments and Religious Affairs, Pishtiwan Sadiq, and Head of the Department of Foreign Relations, Safeen Dizayee, presented a report on the Pope’s visit to the Kurdistan Region, to document and highlight its importance.

Minister of Higher Education and Scientific Research, Aram Muhammad Qadir, also presented the latest draft of the project to grant permission to public service employees to take leaves of absence to study in the Kurdistan Region or abroad. After a number of exchanges and amendments, the project was approved.

The Relationship between the Kurdistan Region and the Vatican

After the war for freedom in Iraq ended, a war which was a period of great terror and violence in the country’s history, the Kurdistan Region flourished as a peaceful and stable area where not only Iraqi Christians, but many others from all walks of life, came to for protection and acceptance. The first official and publicized meeting between senior Kurdistan Region officials and the Vatican was in 2005, when President Masoud Barzani visited the Vatican and was greeted by Pope John Paul II. On February 24, 2011, Pope Benedict welcomed President Masoud Barzani on another visit.

Pope Francis had his first meeting with President Masoud Barzani on March 13, 2013, and met a second time at the Vatican on May 30, 2014. The meeting coincided with the sudden influx of refugees to the Kurdistan Region, notably from the Nineveh province. Rather than focus on bilateral relations, Pope Francis and President Masoud Barzani took the opportunity to discuss the plight of Iraqi IDPs and Syrian refugees and jointly called for the world to help.

On March 5, 2016, Vatican Ambassador to Iraq, Alberto Martin Ortega, thanked the people and the government of the Kurdistan Region for their hospitality in welcoming such a large number of refugees, who had to abandon their homes for safety.

At the time, Prime Minister Nechirvan Barzani met with Pope Francis on March 2, 2015, to discuss steps the Kurdistan Regional Government was taking to ensure a peaceful life for refugees and IDPs. He spoke of the situation on the ground and how hundreds of thousands of innocent people were forced to leave their homes due to ISIS and threat of terrorism, and found refuge in the Kurdistan Region.

Former Prime Minister Nechirvan Barzani and Pope Francis then met on January 12, 2018 in Vatican City, where they discussed ties between the Kurdistan Region and the Vatican, as well as the situation for Christians in Iraq.

Current Prime Minister of the Kurdistan Region, Masrour Barzani, met with the Vatican’s Council of Justice on February 19, 2020 and presented Pope Francis a painting depicting the ethnic, religious, and cultural fabric of coexistence in the Kurdistan Region.

The Prime Minister met with Cardinal Petro Parolin, as the Kurdistan Regional Government announced its commitment to religious coexistence and called for discussions between religious representatives to foster a greater culture of acceptance, reconciliation, and harmony between the people.

Welcoming Ceremony for the Pope

The Kurdistan Region celebrates the diversity of its people, and has always welcomed those who have lost their homes due to violence, political and religious persecution, and were looking to start a new life somewhere safe.

“You are the representative of peace, forgiveness and coexistence, and the role you play in this field is our pride,” Pope Benedict had told President Masoud Barzani in 2011. It was the Kurdistan Region’s welcoming nature which led the Vatican to issue this statement.

The Kurdistan Region will continue to protect its land and its people, which includes Christians, Yezidis, and all minorities it has welcomed into its arms. On December 27, 2018, during his meeting with Cardinal Petro Barolin, Masrour Barzani recalled that when a group of ISIS members attacked the Kurdistan Region, and he had told his fellow Christians “We stand united, we have a common goal, so we live together and die together. The international community should protect Christians and allow them to stay on their own land, not force them to leave their homes to find safety.”

The Kurdistan Region will continue to protect its Christian minority, which hold five parliamentary seats in the region’s Parliament, whose children can study in their own language and are provided special accommodations at school, which holds special status within the Ministry of Endowments and Religious Affairs, and who contribute meaningfully to the political process, holding seats in the Presidencies, Parliament, and the Council of Ministers and helping shape the history of the Kurdistan Region. 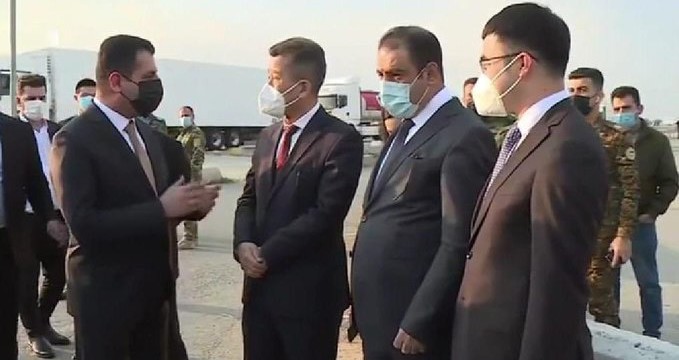 I am pleased to confirm that we have received an early batch of 5,000 doses of the Sinopharm vaccine. This is an important milestone in our fight against COVID-19 and our ongoing efforts to protect our brave frontline workers. I thank the People’s Republic of China for their generous donation.

Once they have been inspected by our medical teams, and the delivery plan approved, the vaccines will be distributed to designated health centers of all Kurdistani provinces to be administered to frontline healthcare staff.

The KRG has been working hard to ensure the delivery of vaccines. In parallel to ensuring Kurdistan receives its share from the federal government, we are also negotiating directly with leading pharmaceutical companies to acquire more doses for our region. This is something I am personally determined to do and regularly following to ensure every Kurdistani has access to the vaccines as soon as possible.

This will not be an easy task. We must vaccinate over 6 million citizens. That’s why we are designing a comprehensive vaccination program; with frontline health workers, security forces, the elderly and those at risk prioritized to receive the first doses. We will then mobilize to vaccinate the general population in stages by age, which will, in time, allow us to return to our lives and livelihoods, and allow our hard-hit economy to recover.

I am confident that we are beginning to turn the corner. But the KRG cannot do this alone – everyone must play their part for the good of the general public. That starts with embracing the recent measures; sticking to the guidelines will save lives.