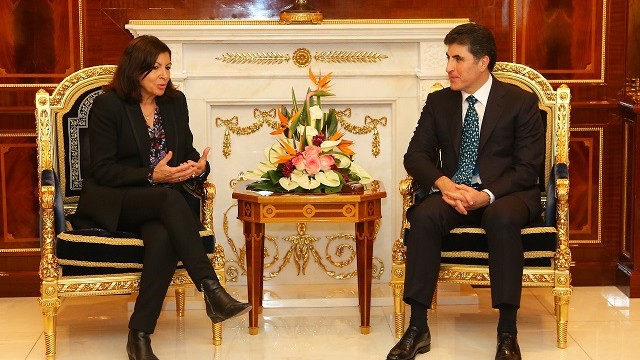 Mayor Hidalgo expressed her desire to develop relations with the governorates of the Kurdistan Region, and cooperation in several sectors, particularly clean energy, culture, transportation and communications.

She commended the people and government of the Kurdistan Region for hosting, accommodating, and providing assistance to a large number of IDPs and refugees and the effective role of Peshmerga forces in the fight against terrorism, thus contributing to the protection of world security. She also praised the peacefull coexistence among various religious and ethnic communities in the Kurdistan Region.

Prime Minister Barzani thanked France and the international community for supporting the Kurdistan Region against ISIS. He said that without such assistance victory would not have been achieved. He stated that the current phase in the fight against terrorism requires the eradication of ISIS ideology.

He stressed that the Kurdistan Regional Government promotes the Region’s ancient tradition of tolerance and coexistence among its communities. As example, he mentioned the opening of a new Armenian Church in the Kurdistan Region last week in Erbil, helping also the displaced Armenians who took refuge in Kurdistan to pray in their own church.

As the relations with Baghdad start to improve and the economy to recove after the victory on ISIS, Prime Minister Barzani stressed that it is time now to work on development, including adoption of clean energy and environmental protection measures.

The delegation commended the Kurdistan Regional Government for hosting, accommodating, and providing assistance to a large number of IDPs and refugees without discrimination. They stressed the importance of continuation of assistance to all communities who are displaced due to ISIS’ terrorism until personal security and political stability is reasonably assured in their home areas.

The situation of the greater region and topics related to economic improvement of the Kurdistan Region were also discussed.

Minister Mustafa, Head of the Kurdistan Regional Government Department of Foreign Relations (DFR), welcomed Ms Evans in her new role as the country director, saying that the DFR and other KRG institutions work hard to maintain ties with partners and facilitate the important work of NGOs in the Region.

Minister Mustafa thanked Mercy Corps for their humanitarian assistance to displaced persons, in particular for their important work of empowering women and children living in camps. He said  “The KRG is committed with the international community to provide services and an effective response to the basic needs of refugees and IDPs including food, education, and health, and to help them to return to their original homes”.

He also briefed Ms. Evans on current developments in Kurdistan and coordination mechanisms with humanitarian and international organizations, Erbil-Baghdad ties and the formation of the new KRG cabinet.

Ms Evans said that Mercy Corps’ goal is to empower young people through education and helping them to return to their homes. She looked forward to strengthening cooperation with the KRG.

Mercy Corps has been working in Iraq since 2003, implementing relief and development programs much of them focused on refugees and displaced persons.

The delegation expressed their gratitude for assistance provided by the KRG in support of USIP activities. They commended the Kurdistan Regional Government for hosting, accommodating, and providing assistance to a large number of IDPs and refugees.

The delegation expressed their concern regarding the causes that prevent their return to their place of origin, due to inadequate safety and services. They highlighted the importance of effective discussion among government institutions with displaced people.

Prime Minister Barzani assured the delegation that the KRG exert all efforts to build confidence among various communities and support effective services to enable them to return to their homes.

He also explained the political process in Iraq and efforts to establish a strong relationship between the Iraqi government and the Kurdistan Region. This has already helped solve some issues and is enabling resolution of more issues in the future.

Prime Minister Barzani also noted serious efforts are being made by all parties to soon form the new KRG cabinet.