In affirming his government’s intention to strengthen bilateral relations, Mr. Amendola noted his country will continue to provide humanitarian and military assistance to the Kurdistan Region.

He praised the role of the Peshmerga forces in the war against ISIS and expressed appreciation of the people and government for accommodating and assisting a large number of refugees and displaced persons.

Prime Minister Barzani expressed his gratitude and appreciation for Italy’s military and humanitarian assistance. He stressed, however, that the fight against ISIS is not the sole responsibility of the Kurdistan Region, but also that of the international community, particularly the coalition countries.

The anticipated liberation of Mosul, reconstruction of liberated areas, maintenance of Mosul Dam, the political situation in Baghdad, and KRG relations with Baghdad and neighbouring countries were also discussed in the meeting. 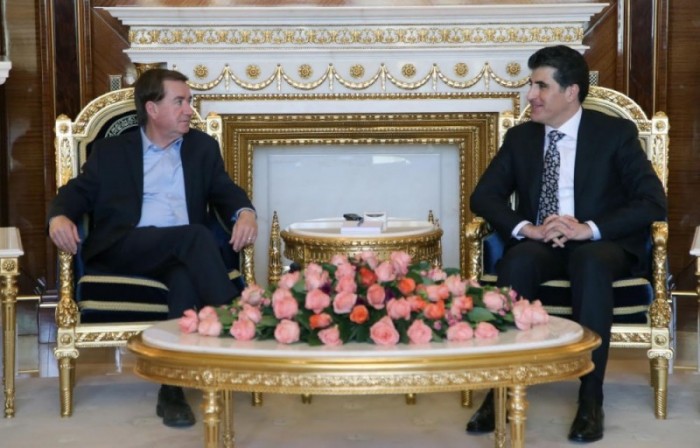 The American delegation reaffirmed their commitment to support Kurdistan Region and its military, the Peshmerga forces, in the war against terrorism.

The visiting delegation also commended the Kurdistan Regional Government for hosting and sheltering a large number of refugees and internally displaced persons.

The statement concludes by expressing the gratitude of the people of the Kurdistan Region to the international community for passing the resolution which remains, twenty five years after its passing a valuable international decision.

The two sides affirmed the importance of developing and strengthening the relations between the Kurdistan Region and the Czech Republic.

While stressing the continuation of her country’s support for the Peshmerga forces in the war against ISIS, Ms. Drdáková said her country intends to implement a number of projects in the Kurdistan Region. These projects include sponsoring activities in Ashti Camp in Slemani Governorate for displaced people, building a church in Alqosh, and training Kurdistani doctors in Prague.

The situation in the Middle East in general, and Iraq and the Kurdistan Region in particular, were also discussed.

With its universal reach and competitive pricing .KRD is destined to be an attractive choice of domain for everyone. We encourage brands, organizations and individuals to take this opportunity to register the names that are important to them.
“In an era of increasing global connectivity and emergence of billions of new internet users worldwide .KRD eases the limitation of millions of domain names registered in other top level domains such as .com or .net” said Hiwa Afandi, Head of DIT.
With an increasing number of partnering registrars all over the world, .KRD domain registrations are now available through retailers such as 101Domain, DomainDiscount24, OpenProvider, Namecheap and NameISP. Registrations are also available through brand protection agencies such as MarkMonitor and SafeBrands.
A list of featured registrar partners can be found at www.dot.krd