The United Arab Emirates Deputy Minister of Economy and Trade, Abdullah Saleh, visited the Kurdistan Region this week to attend the 2014 TradeUAE Iraq conference in Erbil.

The conference included 115 Emirati companies specializing in a wide range of sectors, including energy, the food industry, petrochemicals, construction, as well as companies offering banking and communications services.

Deputy Trade Minister Saleh said that the UAE remains committed to its investment projects in the Kurdistan Region, clarifying that they have not been halted. He attributed delays to minor obstacles, which include bureaucratic issues common in most countries in the region. He said, “The UAE is committed to contribute to the economic growth of Kurdistan, where we have been among the pioneers.”

The Deputy Minister added that business and investment opportunities continue to expand and that this has led to increased opportunities for potential investors in various sectors. He emphasized that the UAE remains committed to investing in Kurdistan as well as expanding its operations and activities, stating that the UAE is not under pressure from the federal government in Baghdad regarding its investment projects in the Kurdistan Region.

Deputy Minister Saleh also said that UAE companies are looking to establish heavy industrial projects to serve the Kurdistan Region as well as Iraq as a whole. He reaffirmed that last year’s conference, the first TradeUAE conference held in Iraq, was also a success and that Erbil will be the gateway for UAE investment. He pointed out that the volume of bilateral trade between Iraq and the UAE exceeds $13 billion, $4 billion of which is invested in Kurdistan, with the majority, $3 billion, dedicated to Erbil.

UAE Consul General Rashid al-Mansouri said that there are more than 120 Emirati companies operating in the Kurdistan Region. He said, “The UAE is committed to strengthening relations with the Kurdistan Region politically and economically, and we will work together towards a strong, strategic relationship.”

The Consul General added, “The UAE will continue to bolster its presence in the Region. We will increase the number of flights, and the Abu Dhabi Islamic Bank will open in the near future. Large Emirati companies, such as Taqa and Maydan for housing and construction, as well as a number of state-owned companies will begin work here after the requisite legal procedures are finalized.”

Mr Rashid Al-Jarwan, Executive Director and Board Member of Dana Gas, told KRG.org that Dana Gas has been able to extract more than 100 million barrels of oil suitable for local consumption since it began operations in Kurdistan in 2007. He added that Dana Gas extracted more than 340 million cubic feet of natural gas in the Khormor field. The gas has been used to generate electricity through a 180-kilometre pipeline, and the Kurdistan Region currently produces 1600 megawatts of electricity per day from this supply of gas.

Al-Jarwan said that Dana Gas remains committed to its production level targets and hopes to increase those levels in the coming years. He added that TradeUAE Iraq 2014 provides opportunities for large Emirati companies to contribute to the successful implementation of projects in Kurdistan, which will also enhance the confidence of new investors. He stated that disputes between Baghdad and Erbil have not affected the UAE’s economic activities in the Kurdistan Region, and that the UAE plans to increase its trade volume with Iraq and with the Kurdistan Region in particular. 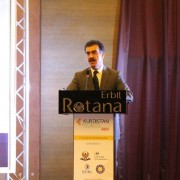 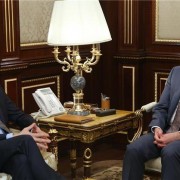