News
You are here: Home / News / Spain supports delivery of arms to Kurds with the consent of Iraq 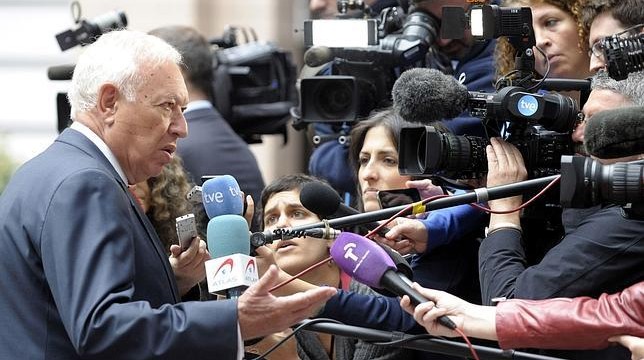 Many EU member states are in favor of providing weapons to the Kurdish forces in order to halt the advances of the Islamic State of Iraq and Syria (ISIS) in the country; on the condition of Baghdad’s consent.

The Minister of Foreign Affairs of Spain, Jose Manuel Garcia-Margallo, has approved providing arms to the Kurdish authorities in Iraq “only” with “the consent of the Iraqi government”, the Minister insisted, mentioning  that in Syria the international community reacted too “late” to stop the Islamists.

“This is about the delivery of weapons to the authorities of Kurdistan, supported by the consent of the central government” said Margallo, “and this should be inclusive for all communities in Iraq and ensure the territorial integrity of the country”, he added on his arrival to the Council of Foreign Ministers of the EU in Brussels.

The Minister explained that if the delivery of weapons is not authorized urgently “we will find ourselves in a similar situation to the one we have in Syria, the reaction of the international community was too late and was not enough.” “Spain is insisting that this military support should be provided only with the consent of the central government,” he insisted.

The Minister also mentioned the delivery of humanitarian aid to Iraq, saying that Spain proposes its extension in order to allow “delivery of more variety of goods”, especially including Spanish goods, mostly food, which are subject to the sanctions of Russia and can be used to relieve the needs of the refugees in Iraq.

The French Minister of Foreign Affairs, Laurent Fabius, recalled that France was “one of the first countries to react and send humanitarian aid and weapons and actually claimed to conduct this extraordinary meeting of the foreign ministers of the EU on Friday for the mobilization of the EU to support Iraq. “I expect Europe to mobilize and support Iraqi and Kurdish people” Fabius said.

“This is a situation when not only we have to welcome the American military support to stop ISIS, but also, as I believe, Europeans cannot just stay and watch the brave fight of Kurdish security forces, we have to act “, said the German Foreign Minister, Frank-Walter Steinmeier, who also authorized a few days ago an arms shipment from Germany.

“We also have to see what we can do for the protection of the security forces in Kurdistan. As I said, we need to take all steps and everything which is legally and politically feasible”, explained the German Minister, who is planning a trip to Iraq this weekend.

The EU has modified in 2004 the arms embargo on Iraq to allow delivery of military aid to the country under the request of the Baghdad government, so EU currently is already legally supplying weapons and ammunition to the Kurdish forces, according to European diplomatic sources.

Italian Minister of Foreign Affairs Federica Mongherini defended “a single EU position” on the matter and has claimed that it is “important” for Italy to “find the right way to act always with the direct consent of the government in Baghdad.

The UK has already confirmed their support. “We’re already sending ammunition and supplies from other Eastern European countries to Erbil, “added the British Foreign Secretary, Philip Hammond, who also underlined the importance for the EU to send “a clear signal “of support to the newly appointed Iraqi Prime Minister Haider Al Abadi, and the need for the country to form “a government that represents all the people of Iraq” to “get rid of this terrible threat” of ISIS.

The Czech government, which also studied the possibility of sending weapons to the Kurds, confirmed on Friday that they will do so.  ”The Foreign Ministry believes that the arms will be delivered by the end of August”, they explained.

The Foreign Minister of Holland, Frans Timmermans, whose country is studying the possibility of providing military support as well, explained that so far they have no “plans to send weapons to the region…But they do not exclude this possibility in the future” he stressed.

His Lithuanian counterpart Linas Linkevicius, has also been in favor of providing a “military assistance” to Iraq.

For the original Spanish text, please click the link :

KRG reviews military progress and plight of the displaced

KRG Prime Minister Barzani: ‘We are sad and shocked’ by the killing of James...