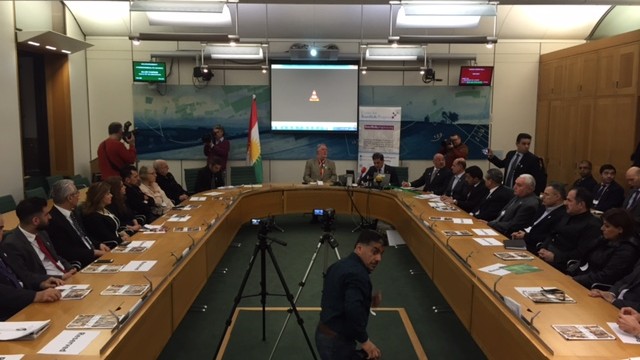 On 16 March 2016 the KRG UK Representation in collaboration with the All-Party Parliamentary Group on the Kurdistan Region and The Centre for Kurdish Progress hosted a Rally for Halabja Remembrance in the British Parliament.

Marking the 28th year commemoration of the Chemical bombardment of Halabja, one of the most horrific crimes committed against humanity in the twentieth century resulting in the death of more than 5,000 innocent people including men, women and children and leaving 10,000 people with server lifelong injures at the hands of the brutal regime of Saddam Hussein simply for being a Kurd, was attended by British Ministers, Members of Parliament, House of Lords, members of the diplomatic community, the former KRG Minister for Martyrs and Anfal Affairs, civil-society, the business community, Kurdish and Iraqi political parties, the Kurdish Diaspora, and representatives from the UK and Kurdistani media organisations.

In his opening remarks, Karwan Jamal Tahir, the KRG High Representative to the United Kingdom, urged the UK and the international community to assist the KRG with the redevelopment efforts of the governorate of Halabja and extend medical treatments to its survivors. He continued to say, “The horrific events that took place in Halabja, twenty-eight years ago today will never be forgotten by the Kurds and we need to ensure the world does not either. We call on the international community to unite against such acts of terror and prevent them from ever happening again and recognise the chemical bombardment in Halabja and the Anfal campaigns carried out against the Kurds in Iraq as an act of genocide.”

The Minister for the Middle East at the Foreign and Commonwealth Office, Tobias Ellwood, reiterated the British government’s solidarity with the people of Halabja and the Kurdistan Region and said “This British government is a friend of the Kurdistan Region. Our ties were very much cemented there 25 years ago when we enforced the no-fly zone to protect the Kurdish people. Since then UK Ministers including myself have continued to highlight the needs and support the rights of the Kurdish people and other minorities in Iraq.”

Hilary Benn, the Shadow Foreign Secretary, from the Labour Party, expressed his gratitude and tribute to the Peshmerga and the KRG for their alliance with the UK and the global coalition to defeat Daesh. He concluded his solidarity message with the people of Halabja and Kurdistan by saying “As we mourn the loss of so many lives in the horror of Halabja let us resolve to giver expression to the words “never again”.

Nadhim Zahawi MP, the Vice-Chairman of the All-Party Parliamentary Group on the Kurdistan Region, a cross party group that works to further strengthen relations between the KRG and the UK, described his emotions and sorrow while hearing about the atrocities of Halabja. He commended the resilience of the people of Halabja and vowed to continue to work toward seeking international recognition for the genocide committed against them. He said “The very inspiring thing about the people of Halabja is they refuse to allow themselves to be consumed by what happened that evil day. They refuse themselves to be allowed to be defeated to be broken by the Chemical Weapon attack. Instead they look to the future, they look to reconciliation and rebuilding their land, as do all of the Kurdish people”

At the end of the event guests had the opportunity to write a message expressing their solidarity with the people of Halabja in the book of commemoration that will be presented to the Governorate of Halabja by the KRG UK Representation in the coming weeks.