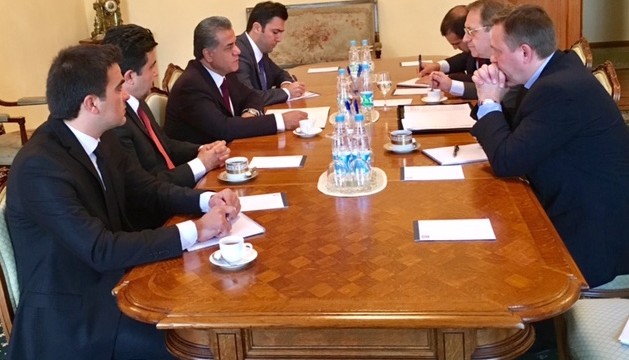 Moscow, Russia (dfr.gov.krd) – KRG Minister of Foreign Relations Falah Mustafa today met with Mikhail Bogdanov, Deputy Minister of Foreign Affairs of the Russian Federation and Special Presidential Representative for the Middle East and Africa to discuss bilateral cooperation and the current situation in Iraq and Kurdistan.

Minister Falah Mustafa thanked Deputy Foreign Minister Bogdanov for his warm welcome and conveyed the greetings of the President and the Prime Minister of the Kurdistan Region to the people and the government of the Russian Federation.

Deputy Foreign Minister Bogdanov, likewise, conveyed his greetings to the President and the Prime Minister of the Kurdistan Region and expressed the support of the government of Russia to the Peshmerga forces in the fight against ISIS. The deputy foreign Minister also commended the efforts of the Kurdistan Region in sheltering and supporting the Syrian refugees and Iraqi displaced people.

Both sides highlighted the historical relationship between the people of Kurdistan and Russia which dates back to the middle of the last century, when General Mustafa Barzani and his accompanying Peshmergas took refuge in the former Soviet Union.

The two sides expressed the desire of their governments to further broaden bilateral ties and discussed the activities of the Russian companies, operating in the Kurdistan Region, particularly in the fields of energy. Minister Mustafa stressed that the Kurdistan Region views Russia as a partner, noting that the Region provides great investment opportunities for the Russian companies.

They also exchanged views on a wide range of issues including the role of Peshmerga in the fight against ISIS, the fight to liberate Mosul, Erbil-Baghdad ties, humanitarian challenges facing the KRG, and post-ISIS governance and stabilization.

Minister Mustafa is on a three-day official visit to Russia. He is accompanied by Dr. Aso Jangi KRG Representative to Russia, Mr. Omer Rashid Director General of Protocol and Delegations and Mr. Niyaz Barzani Director of Media and Communications.