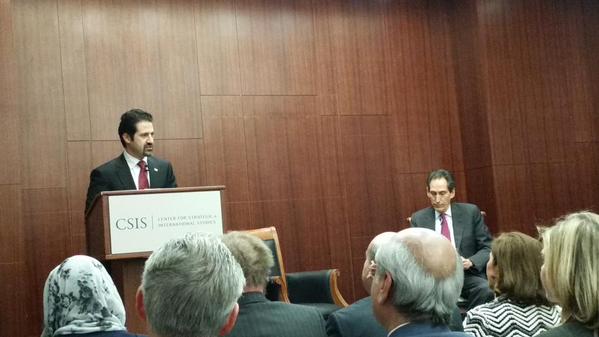 During a speech to an audience of top Washington scholars and officials at the Center from Strategic International Studies, Kurdistan Regional Government (KRG) Deputy Prime Minister Qubad Talabani said, ‘Iraq can only be saved if Baghdad is willing to devolve some of its powers to regional authorities and be more inclusive of minorities.’ He said that the poor policies of the previous government alienated the Sunnis of the country, adding, ‘The Islamic State did not fill a security vacuum, but a political vacuum.’

The Deputy Prime Minister (DPM) concluded a four-day visit to Washington on Thursday, December 11, 2014. The visit included numerous meetings with senior US administration officials and members of Congress, events at leading think tanks, a roundtable discussion with US business leaders, and interviews with several news agencies.

In an opinion published in the Wall Street Journal, Mr Talabani laid out the challenges that Iraq will face in the future, calling for a return to the federalist structure of the Iraqi Constitution. He applauded the recent negotiations with Baghdad, but said that this is ‘Iraq’s last chance’ to succeed.

Earlier this month the KRG reached an agreement with Baghdad to contribute 250,000 bpd of Kurdish oil and 300,000 bpd from the Kirkuk oilfields to the Iraqi central marketing authority in return for the disbursement of the KRG’s share of Iraqi federal oil revenues. The negotiations demonstrated a possible rapprochement in Erbil-Baghdad relations.

‘US airstrikes have succeeded in ending the expeditionary ventures of the Islamic State, forcing them to change tactics. However, defeating these terrorists will require greater cooperation between Kurdish, Iraqi, and international security forces,’ the DPM said at a meeting with Representative Devin Nunes. Rep. Nunes, the new Chairman of the House Select Committee on Intelligence, praised the Peshmerga for their efforts in combating ISIS and highlighted US-KRG cooperation at the Joint Operations Center in Erbil.

Since August, the US and coalition forces have carried out hundreds of airstrikes on ISIS targets throughout Iraq. These efforts are coordinated largely through the Joint Operations Center where over 1,500 US military advisors work closely with the Peshmerga to identify and destroy terrorist positions.

The DPM also met with other influential members of Congress including Senators John McCain, Dianne Feinstein, and Lindsey Graham, and Representatives Michael McCaul, Steny Hoyer, Dana Rohrabacher, and others.

Mr Talabani conducted a number of meetings with US administration and defense officials at the Department of State, Pentagon, and White House. He updated the officials on the political, security, and humanitarian developments in the Kurdistan Region, and asked administration officials to continue to be supportive of the KRG’s efforts to resolve outstanding issues with Baghdad.

He also met with members of the US-Kurdistan Business Council to discuss business opportunities in the region. He said, ‘Kurdistan remains safe, secure, and open for international investment.’

The KRG Mission in Washington hosted a town hall meeting with DPM Talabani for the Kurdish-American community at the Hilton Garden Inn in Fairfax, Virginia. Mr Talabani delivered remarks and updates from the Kurdistan Region, and took questions from the audience for over two hours. He also thanked the community for their ongoing support for the 1.5 million displaced persons. Several organizations in the Washington area, including the KRG Mission, have organization financial and clothing donation drives to bring supplies to those in need.

Dara Khayat: Despite the challenges, Kurdistan Region has preserved its economic...