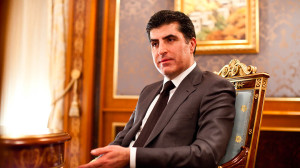 Nechirvan Barzani attended college in Tehran, studying politics and international relations; due to political and personal reasons, however he had to discontinue. In recognition of his achievements, he was awarded an honorary doctorate degree from Washington & Jefferson College in Pennsylvania, United States. He is fluent in Kurdish and Persian, and proficient in Arabic and English. Mr. Barzani is married and has five children.

President Barzani’s vision is to build a peaceful, progressive, modern and tolerant society deeply inspired by his personal values and beliefs in pluralism in political life, and peaceful coexistence among all the religious and ethnic communities within the Region. During his tenure as Prime Minister, he endeavored to develop and stabilize the political process by promoting an inclusive and consensus approach to governance. His vision is for a homeland that is democratic, peaceful and politically stable, and a valued contributor to the peace, stability, and the well-being of Iraq and the Middle East.

Under his premiership, personal security, human rights, and political stability have been enhanced; notably over a dozen laws legislated to ensure women’s rights, press freedom, and action to combat domestic violence. He also promoted religious and ethnic diversity, and coexistence. To support this policy institutionally, the KRG has established specific departments in the Ministry of Endowment and Religious Affairs to address the needs of the Region’s major religious communities.

Mr. Barzani proactively pursued a foreign policy based on enhancing regional and international cooperation to strengthen peace, stability, and development. During his tenure, more than thirty countries have opened official representation offices in the Kurdistan Region.

He also led the Region from a state of devastation through the 2004-2014 decade of accelerated economic growth that resulted in building of thousands of education, and health facilities, transportation projects, and modern airports, electric power, water treatment plants and telecommunication networks. Additionally, he was instrumental in founding a dynamic petroleum industry with over two dozen international oil companies, including Exxon-Mobil, Chevron, Total, and Gazprom Neft.

In 2014, he effectively led the Kurdistan Region through an extremely difficult four years of financial constraints caused by Baghdad’s undelivered constitutional commitments and a dramatic fall in global oil prices that adversely affected public export revenue. The situation was compounded by the ISIS terrorist group’s onslaught, and hosting approximately two million displaced people who fled war zones and sought refuge in the Kurdistan Region.

As Prime Minister, Nechirvan Barzani effectively followed a course to rebuild relations with Baghdad and protect the integrity of the Kurdistan Region as a federal entity, which was threatened after the 2017 Independence Referendum. Following the May 2018 general elections in Iraq, his policies resulted in creating new opportunities for substantial progress to emerge with the aim of normalizing relations with Baghdad and resolving all issues in accordance with the federal Constitution of Iraq.