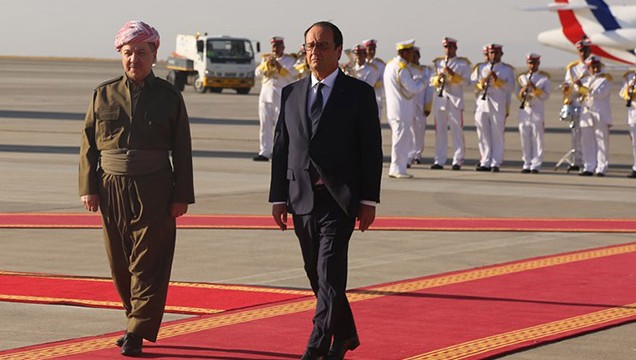 After his arrival in Erbil, President Hollande and President Barzani visited a refugee camp in a district in Erbil, and later held a meeting. President Hollande, the first foreign head of state to visit Erbil since the crisis began, was accompanied by Foreign Minister Laurent Fabios and Defense Minister Jean-Yves Le Drian.

President Barzani described the visit to Kurdistan by President Hollande as historic and thanked the president and people of France for standing by the people of Kurdistan in their hour of need, saying that France was the first European Union country to come to the aid of Kurdistan in the fight against ISIS terrorists. He also added that thanks to the support of France and other countries, the Peshmrega forces are now taking the fight to ISIS and have the upper hand. President Barzani vowed that the Kurdistan Region would continue to fight until the ISIS terrorist group is uprooted and destroyed.