News
You are here: Home / News / European Union expands scope of military and humanitarian engagement in... 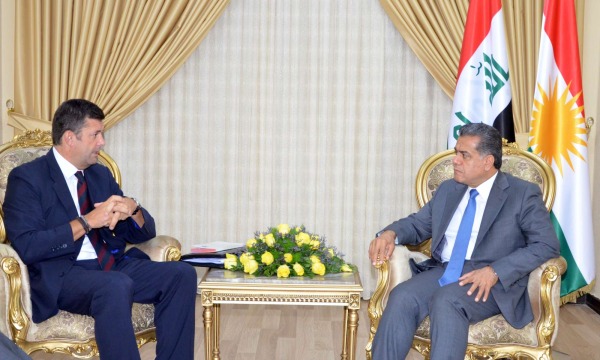 The political chief of the European Union’s delegation to Iraq, Mr Charles Stuart, met with the Head of the KRG Foreign Relations Department Minister Falah Mustafa to discuss the latest humanitarian, military, and political developments and to express the EU’s continued support for Kurdistan.

Mr Stuart said, “In the context of the current crisis in Iraq, the EU delegation in Baghdad has been tasked by Brussels to gather information and analysis on the military situation and the Kurdistan Regional Government’s need for military assistance to cope with the ISIS threat.”

Minister Mustafa welcomed the further engagement of the European Union, stating, “Members of the European Union have played a crucial role in galvanizing humanitarian and military assistance for the Kurdistan Region by communicating the KRG’s message to the international community with appropriate urgency. The government and the people of the Kurdistan Region are grateful for these actions.”

Minister Mustafa briefed the delegation on the latest developments and the formation of Iraq’s new government. He said, “Our participation in the new Iraqi government has once again demonstrated to our friends in the international community that the Kurdish leadership is willing to solve problems with Baghdad through negotiation and dialogue.”