News
You are here: Home / News / The United Kingdom will continue its support to Kurdistan Region 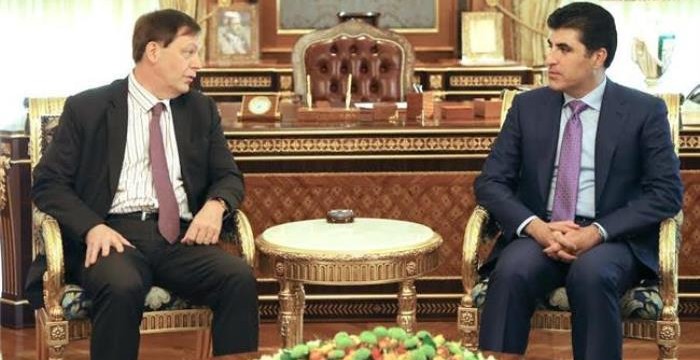 Ambassador Baker discussed the political and economic situation in Iraq, the terrorist threats, Iraqi Government plans to liberate those area that are still controlled by Islamic State terrorist organisation, ISIS, as well as the situation on the battlefront in Kurdistan Region.

He also highlighted the meetings he held with Kurdish political parties. He stressed the necessity of resolving differences through dialogue and preserving the unity of ranks among political forces, particularly at the time when Kurdistan Region faces a tough war against ISIS.

Ambassador Baker reiterated UK government’s support to Kurdistan Region in all the fields.

Prime Minister Barzani stressed that the Kurdistan Regional Government, KRG, will continue its effort to resolve internal issues through dialogue and negotiations.

He reiterated that the undesirable events happened recently in the Region had not affected the morale of Peshmerga forces in the battlefront against ISIS, reaffirming that Kurdistan Region priority is to fight the terrorists and settle its financial sever problem.

Prime Minister Barzani expressed his gratitude to the UK government for the assistance it has offered to the Kurdistan Region in various fields.

The situation in the Middle East in general, the economic situation in Kurdistan Region, and the relations between KRG and the Iraqi Federal Government were also discussed in the meeting.