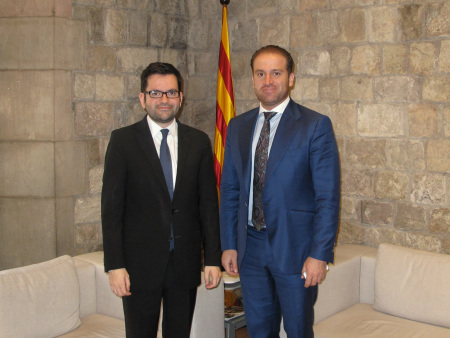 The Kurdistan Regional Government Representative to Spain, Daban Shadala, has just completed a trip to Catalonia where he visited a number of Catalan government officials as well as parliamentarians & members of leading political parties. Mr. Shadala visited the region in order to discuss the recent motion that was brought to parliament regarding the Kurdish right to self-determination on the 10th of July. The majority of parliament voted against the right to Kurdish self-determination and Mr. Shadala’s top priority was to get a clearer picture of the recent event. The right of the Palestinians and Sahrawis to self-determination was also voted out of favor.

The statement declared that the Catalan Government “considers the political future of the Iraqi Kurds as something that can only be decided by the Kurds via democratic and legitimate mechanisms.” Although parliament voted against the Kurdish right to self-determination, the government’s position is supportive of the Kurdish right to determine their own future. He further articulated that the Catalan people have “always maintained a keen interest in the situation of the Kurds, and have always shown their solidarity with them especially in moments of hardship”. He went on to add that the motion was weak, and that it should never have been brought into parliament. Mr. Shadala expressed his concern at the fact that this motion was even held in the first place, and told Mr. Albinyana that “Kurds are very unhappy and are waiting for answers”.

Mr. Shadala also met with Sara Vilà who is a Member of Parliament for the Initiative for Catalan Greens and is also the MP who brought the motion into parliament. She explained that she assumed parliament would support the motion and the right of the Kurds to self-determination, she was hoping to see a majority in favor of the motion, however the result was quite different to what she had predicted. A number of Catalan MP’s had advised her not bring the motion of forward and not to put all three in the same motion.

Partido Poplar MP Daniel Serrano told Mr. Shadala that “we respect the Kurdish cause and we follow it with great attention”. Mr. Shadala also met with the Secretary for International Relations of the Democratic Convergence of Catalonia, Mr. Victor Terradellas I Marè. He informed Mr. Shadala of their disappointment with what had happened and stated that the motion shouldn’t have been brought to parliament.He also voiced the same opinion as many others with whom Mr. Shadala had met, that “the Catalan people have always, and will continue to, support the Kurds”.