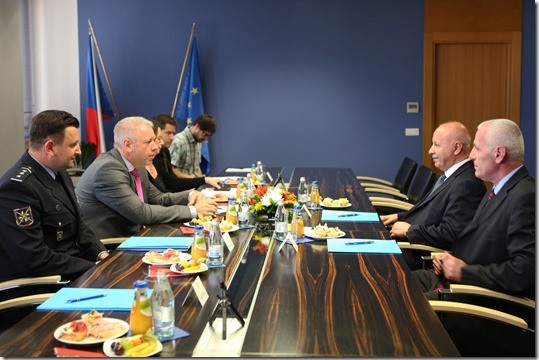 The Government of the Czech Republic has renewed its policy of military support to the Kurdistan Region and confirmed that it will provide Peshmerga forces with weapons and equip them with the latest and most modern military technology.

The Czech Republic made clear its position during a meeting with KRG Minister of Interior Karim Sinjari. Minister Sinjari met with Czech government officials upon the invitation of his Czech counterpart, Minister Milan Chovanec.

In the meeting, Minister Sinjari discussed the latest developments in the Kurdistan Region, Iraq, and the Middle East in general. He also discussed the war against the Islamic State of Iraq and al-Sham (ISIS) militants, as well as the critical role of the international community in providing assistance to the Kurdistan Region and continuing in efforts to eradicate terrorism from the region.

Minister Chovanec expressed the commitment of the government and people of the Czech Republic to assist the government and people of Kurdistan in the war against ISIS terrorists and against terrorism in general. He also conveyed the Czech Ministry of Interior’s willingness to coordinate with the KRG Ministry of Interior in providing supplies and advanced security technology, as well as establishing training courses for the Region’s security personnel.

At a joint press conference, Minister Chovanec stated that the Czech Republic’s police force is prepared to hold training courses for KRG security personnel in detecting and defusing bombs and explosive devices. He also announced that he had requested Czech police force officials to accelerate plans for the provision of assistance to the KRG Ministry of Interior in combating terrorism.

Minister Sinjari expressed his confidence in the Czech Republic’s assistance, pointing to the importance of the provision of technologically advanced security systems, surveillance systems, and the establishment of training courses to bolster KRG security forces in various fields. He added that the KRG considers the Czech Republic a long-term partner.

In the context of the visit, Minister Sinjari held a number of meetings with various Czech security officials regarding coordination and cooperation between the two interior ministries.

Minister Sinjari also met with Deputy Minister of Defense Tomas Kuchta. Both officials discussed how best to strengthen cooperation between Kurdish and Czech armed forces. After the meeting, Minister Sinjari visited a factory and storage units where Czech forces store heavy weapons, including tanks and armored vehicles, to get a better sense of the military capabilities of the Czech Republic. The Minister underscored the need for military support from Czech armed forces for the KRG’s Interior and Peshmerga ministries in the battle against ISIS terrorists.

The Minister later visited the Czech Foreign Ministry. He briefed senior foreign ministry officials, led by Mr Lukasz Kautsky, on the latest political and security developments in Kurdistan. He also detailed the plight of the displaced people from other parts of Iraq and refugees from Syria, emphasising the need for the international community to provide humanitarian assistance to these families. Czech Foreign Ministry officials restated their government’s commitment to support the Kurdistan Region and help provide aid to the displaced people sheltered in Kurdistan.

Finally, Minister Sinjari visited the office of the President of the Czech Rebublic, where he met with the President’s Advisor for International Relations, Mr Hynek Kmonicek. They discussed the importance of bolstering bilateral relations, and both officials shared similar views on a number of strategic issues. Both highlighted the value of high-level visits between Erbil and Prague and supported the prospect of such delegations in the future.

A statement from the President of the Kurdistan Region on terrorist attacks...