Erbil, Kurdistan Region, Iraq (GOV.KRD) – Deputy Prime Minister Qubad Talabani on Sunday met with representatives from the United Nations Assistance Mission for Iraq (UNAMI) and the World Health Organization (WHO) in Erbil, to discuss the latest developments in the fight against the coronavirus.

The Deputy Prime Minister thanked the representatives for their continued help.

Erbil, Kurdistan Region, Iraq (GOV.KRD) – I extend my warm wishes to Muslims in the Kurdistan Region and across the world on the advent of Ramadan. I hope this holy month brings compassion, joy and good deeds. May God answer all our prayers.

On this occasion, I also extend my gratitude to religious leaders and clerics in the Kurdistan Region, who are playing an important role in communicating health guidelines designed to protect the public from the coronavirus. I call on them to continue advising people to comply with these health measures for their own safety and that of their fellow citizens.

I hope Ramadan brings blessings and happiness to everyone.

Erbil, Kurdistan Region, Iraq (GOV.KRD) – Prime Minister Masrour Barzani on Wednesday chaired a cabinet meeting via video conference to discuss the ongoing coronavirus threat. He thanked the public for their resilience and commitment to the lockdown measures aimed at containing the disease and urged continued compliance.

The Prime Minister said local authorities have taken steps in lifting some social distancing measures to normalize peoples’ lives, while key mitigation measures remain in place to prevent a rebound of the disease. These efforts will continue to ensure life goes back to normal in a phased manner.

The cabinet also discussed the recent visit by a KRG delegation to Baghdad, as discussions continue during the difficult economic situation regarding the Kurdistan Region’s share of the federal budget.

The cabinet reiterated its commitment to the agreement reached with the Iraqi Ministries of Oil, Finance and Planning in late 2019 concerning this year’s budget.

The cabinet also stressed that they will do their best to pay the salaries of government employees on time. They reiterated that any payment delays are due to falling oil prices and the coronavirus lockdown measures, as well as the delay in receiving the KRG’s budget allocation from Baghdad.

Finally, the cabinet wished a happy Ramadan to Muslims in the Kurdistan Region, and decided that schools, mosques, churches and other places of worship will remain closed to prevent community transmission and a resurgence of the coronavirus.

Erbil, Kurdistan Region, Iraq (GOV.KRD) – I extend my warmest wishes to journalists in the Kurdistan Region on the 122nd anniversary of Kurdish journalism and the publication of ‘Kurdistan’, the first Kurdish newspaper.

I also congratulate you on the 22nd anniversary of the establishment of the Kurdistan Journalists Syndicate.

Media outlets in the Kurdistan Region are playing an important role in communicating government guidelines designed to protect the public from the coronavirus pandemic.

I also pay tribute to the intellectuals and journalists serving the people of Kurdistan, as well as those who lost their lives defending our region.

Erbil, Kurdistan Region, Iraq (GOV.KRD) – Prime Minister Masrour Barzani on Wednesday chaired a cabinet meeting via video conference to discuss the latest developments in the battle against the coronavirus, and to review social distancing measures.

The Kurdistan Regional Government (KRG) thanked the region’s population for their resilience and commitment to public health guidelines, and decided to extend the existing leave for staff of government departments until May 2. All travel restrictions remain in place.

Deputy Prime Minister Qubad Talabani also attended the meeting, in which Prime Minister Barzani stressed that the government will strive to ease the burden on peoples’ livelihoods without undermining government guidelines in the fight against the virus.

The cabinet also decided to assign KRG Minister of State Khalid Salam Saeed to form a delegation to visit Baghdad to discuss the Kurdistan Region’s share in the Iraqi government’s budget, and to coordinate with the federal government to fight the coronavirus pandemic and tackle the economic crisis.

The KRG paid tribute to victims of the Anfal genocide on the 32nd anniversary of this horrific crime, and called on the federal government to fulfill its moral and constitutional duty to compensate victims of this massacre as well as for the damage inflicted on the Kurdistan Region due to racist policies of previous regimes, as stipulated in the constitution.

The cabinet also condemned the ISIS terrorist attack on the town of Kolajo last week, in which two Peshmerga fighters were killed and others were injured. This attack is a reminder of the ongoing threat of terror to our region.

The KRG also commended Peshmerga forces for assisting security forces in enforcing the curfew, alongside their tireless endeavours to protect Kurdistan Region from terrorist attacks.

Finally, the government sent warm greetings to Christians on the occasion of Easter and to Yazidis on their new year. 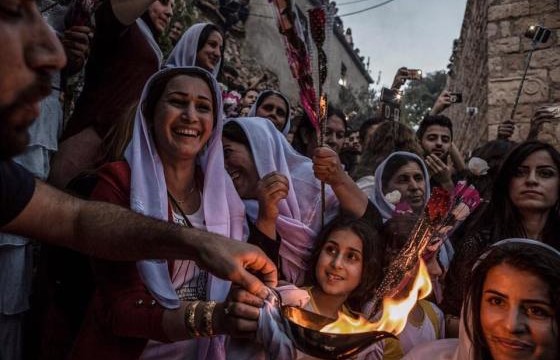 Erbil, Kurdistan Region, Iraq (GOV.KRD) – I extend best wishes to my fellow Yazidi citizens in the Kurdistan Region and across the world on the occasion of the Yazidi new year. I hope the new year will bring you happiness, and mark an end to the pain and hardship caused by the genocide you suffered at the hands of Isis terrorists in recent years.

The Kurdistan Regional Government is committed to defend and protect the rights of all religious and ethnic groups, including the indigenous Yazidi community.

Erbil, Kurdistan Region, Iraq (GOV.KRD) – Today marks the 32nd anniversary of the worst genocide against the peoples of Kurdistan. The genocide was a series of massacres which aimed to eliminate the Kurdish identity and wipe out the Kurdistani nation.

This was an horrific crime, which the people of Kurdistan cannot forget. Thousands of innocent people were killed while the world watched. The profound pain will continue to live on in our memories. But this anniversary should not merely be a commemoration of our past suffering. We must work together to eradicate the evil and racist ideologies that drove the Anfal genocide.

The Kurdistan Regional Government will continue to strive for a global recognition of Anfal as genocide, and improve the living conditions of the families of the victims. The Iraqi government too should fulfil its moral and constitutional responsibility to compensate victims of this terrible crime and provide reassurances that it will not be repeated in the future.

I extend my best wishes to those who observe Easter in the Kurdistan Region, Iraq and around the world. I hope God answers your prayers and I wish you a peaceful celebration.

Kurdistan has long been a cradle for the coexistence of different religions, and the Kurdistan Regional Government wishes to take this opportunity to reiterate its commitment to defend, protect and develop religious tolerance.

Easter coincides with the coronavirus pandemic which has hit the entire world, including the Kurdistan Region. At this time, I call on the public to continue abiding by public health guidelines.

The Deputy Prime Minister spoke about the government’s upcoming plans and thanked healthcare professionals and the security forces for their crucial work. He also recognised the public’s commitment to following government guidelines and emphases that the guidelines are in place to save lives.

During the meeting, Minister of Health Saman Hussein Muhammad presented the latest figures on coronavirus in the Kurdistan Region.

The following decisions were made in the meeting after a careful review of the latest curfew guidelines.

1. The 48-hour curfew will remain in place until midnight (12 am).
2. The curfew decree banning travel through the Kurdistan Region until April 10 will remain in place until the Ministry of Interior, governorates and local administrations issue new guidelines, including a timeline for markets and grocery shops to open.
3. The government will determine a time for people across the Kurdistan Region to pay tribute to healthcare workers and security forces who have been working tirelessly in the fight against coronavirus.
4. Relevant departments in the KRG are asked to prepare their reports on future plans and guidelines to protect the public from this virus.
5. The Ministry of Interior will form a committee to investigate an incident involving a physician who was recently attacked in the province of Slemani.

The Deputy Prime Minister exchanged views with Dr Abubakir on the latest developments in the fight against the pandemic, as well as the measures being taken to slow and stop the spread of the virus.

He commended the governor for implementing government guidelines and his efforts to protect people from the pandemic.

Deputy Prime Minister Talabani asked the governor to maintain the strong coordination currently in place among city divisions to confront the threat of the virus.

He also thanked the city’s health department and security forces for their hard work in enforcing government guidelines.