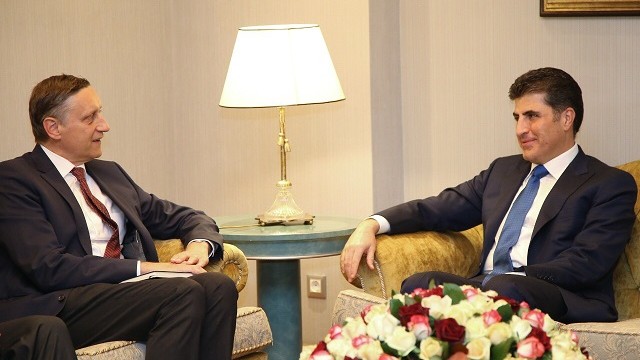 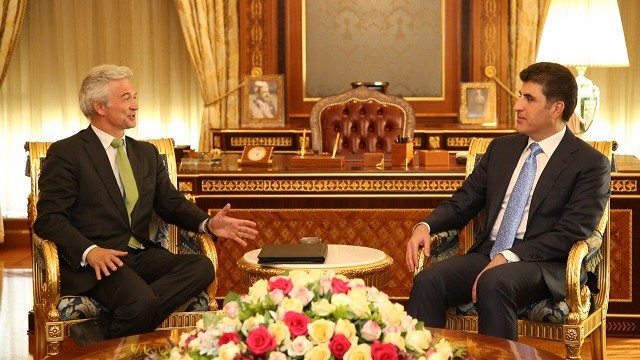 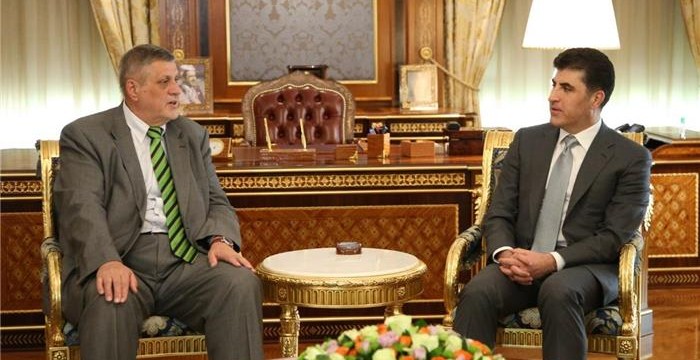 In the meeting, both sides discussed post-referendum developments, reactions and the sanctions that the Baghdad authorities imposed on the Kurdistan Region, that included banning international flights to and from both Erbil and Slemani International Airports.

Prime Minister Barzani reiterated his government’s position which is resolving all the issues with Baghdad through dialogue and negotiations, pointing out to the important role the United Nations can play in this process. He emphasized that the Kurdistan Region is with de-escalating the tension with Baghdad and is against any step that may further exacerbates the situation. 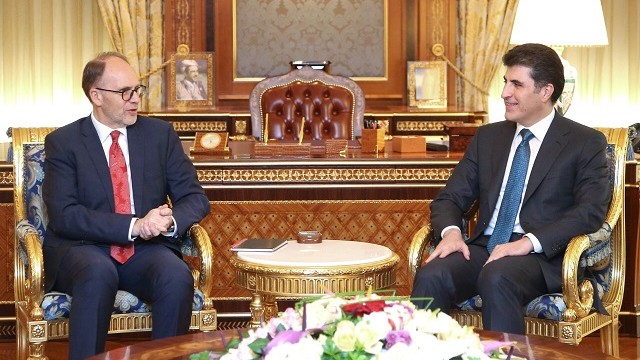 In the meeting, post-referendum developments in the Kurdistan Region, Iraq and the wider region were discussed.

Both sides agreed on the need to calm the situation and engage in dialogue to address current contentions between Erbil and Baghdad.

The beloved Kurdish leader Jalal Talabani passed away on Tuesday in a hospital in Germany. Talabani was appointed president of Irak in 2005 by the Transitional National Assembly, he was the country’s first non-Arab president, and was instrumental in creating the current Iraqi constitution.

Talabani was the founder and Secretary General of the Patriotic Union of Kurdistan (PUK), one of the main Kurdish Iraqi political parties. Talabani, who was about to turn 84, he resigned as head of state in 2014 due to health conditions. Many observers attributed the deterioration of relations between Baghdad’s central government and the regional government of Erbil to his absence. In a curious twist of history, the veteran of the Kurdish cause was also the man who helped keep Iraq together.

A man with a great sense of humor, Talabani stood out from the outset for his diplomatic skills, aided by the fact that besides Kurshish he spoke fluent Arabic, Persian and English.

We extend our most sincere condolences to the widow, Hero Ibrahim Ahmed, his two sons, Bafel and Qubad, and all those who loved Mam Jalal. 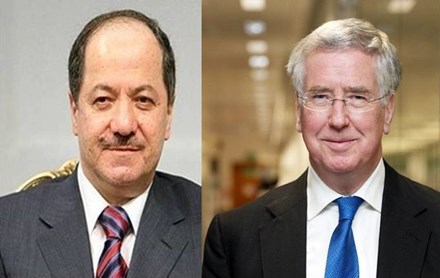 In a press conference, Hndren Muhammad, the head of the Commission, announced an overwhelming victory of Yes in the referendum and provided the following preliminary figures:

Following the approval by the Court of Cassation, the above figures will become final results.

Ambassador Wolters commended the Kurdistan military forces, the Peshmerga, for their role in the fight against the Islamic State terrorist group, ISIS. He also praised the government and people of the Kurdistan Region for having accommodated and provided services to a large number of displaced people.

Ambassador Wolters expressed his country’s readiness to offer assistance to the Kurdistan Region in various fields.

The referendum on Kurdistan independence to be held on 25 September was also discussed. Prime Minister Barzani briefed the Dutch Ambassador about the reasons that led the Kurdistan political leadership to hold the referendum that included Baghdad’s failure to honour its constitutional obligations towards the Kurdistan Region.

He stated the referendum is a step toward securing the legitimate rights of the people of Kurdistan. He stressed the need for serious and friendly dialogue between Erbil and Baghdad, a junction point where the international community could play a positive role.

Prime Minister Barzani reaffirmed coordination and cooperation will continue among the Peshmerga, the Iraqi army, and the international coalition in the fight to eliminate ISIS and the terrorist threat. 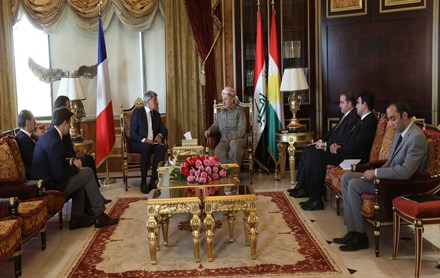 Today the United Nations Security Council unanimously voted to establish a team to assist Iraq in investigating ISIS crimes and holding the terrorist group accountable for war crimes, crimes against humanity, and genocide.

A Special Adviser will be appointed by the Secretary-General to head an investigation team of international and Iraqi experts that will initially be given a two-year mandate.

The Kurdistan Regional Government welcomes this important step towards justice for the victims of the heinous crimes committed by ISIS against all people, especially the Yezidis and Christians.
The KRG was the first government to label ISIS crimes as genocide and has been working towards achieving justice and accountability since 2014. We have asked the United Nations, the International Criminal Court, and individual governments including that of Iraq to start the process of an international investigation and tribunal or court.

We are pleased and relieved that the government of Iraq finally invited the UN to investigate ISIS’ crimes in Iraq and we welcome the role of the UK and Belgium in bringing the resolution to a successful conclusion today.

Despite years of public lobbying and private efforts to make this happen, the KRG was excluded from the meeting today. Regrettably, while the KRG delegation is in New York and at the UN headquarters, Minister Falah Mustafa Bakir and Representative Bayan Sami Abdul Rahman were not accorded the appropriate badges to enable them to attend the meeting.