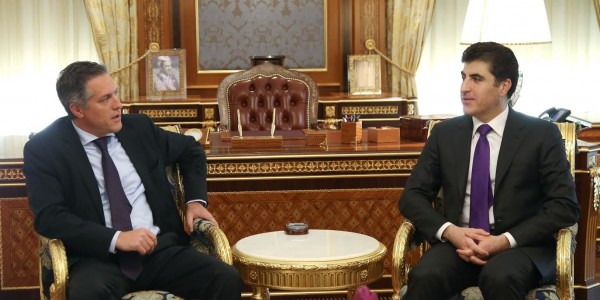 Erbil, Kurdistan Region, Iraq (cabinet.gov.krd) – Prime Minister Nechirvan Barzani, on Monday received Mr. Patrick Simonnet, the European Union’s Ambassador to Iraq and his accompanying delegation including his deputy and head of the EU Mission in Erbil.

Mr. Simonnet expressed satisfaction with the relationship between the Kurdistan Region and the EU and the coordination between the two sides. He reaffirmed EU’s support for the Region and Iraq.

Mr. Simonnet praised the role of the Kurdistan Peshmerga forces in the fight against the Islamic State terrorist organization, ISIS. He also commended the Kurdistan Region for opening its doors to the high number of IDPs and refugees.

He noted that during this visit it had been made clear to him the financial crisis which the Kurdistan Region faces currently is the greatest threat to the Region.

He presented an overview of the current situation in the Kurdistan Region and the obstacles it faces, including the cutting-off of its share in the federal budget by Baghdad, the fight against ISIS, the hosting of a high number of refugees and IDPs, and the sharp fall of the oil price.

He also explained the KRG’s plans for reforms and measures to combat the financial crisis and expressed hopes that the international community would assist the Region.

Prime Minister Barzani also discussed the ongoing problems with Baghdad and stated that if Baghdad has genuine interest in solving the problem, the KRG firmly believes solutions could be found through dialogue and discussion, particularly during these times when financial difficulties are of mutual concern.

Prime Minister Barzani stressed that the international community should ensure that the Kurdistan Region receives its share of any loans to Iraq.